Patek Philippe raises the bar on the minute repeater. 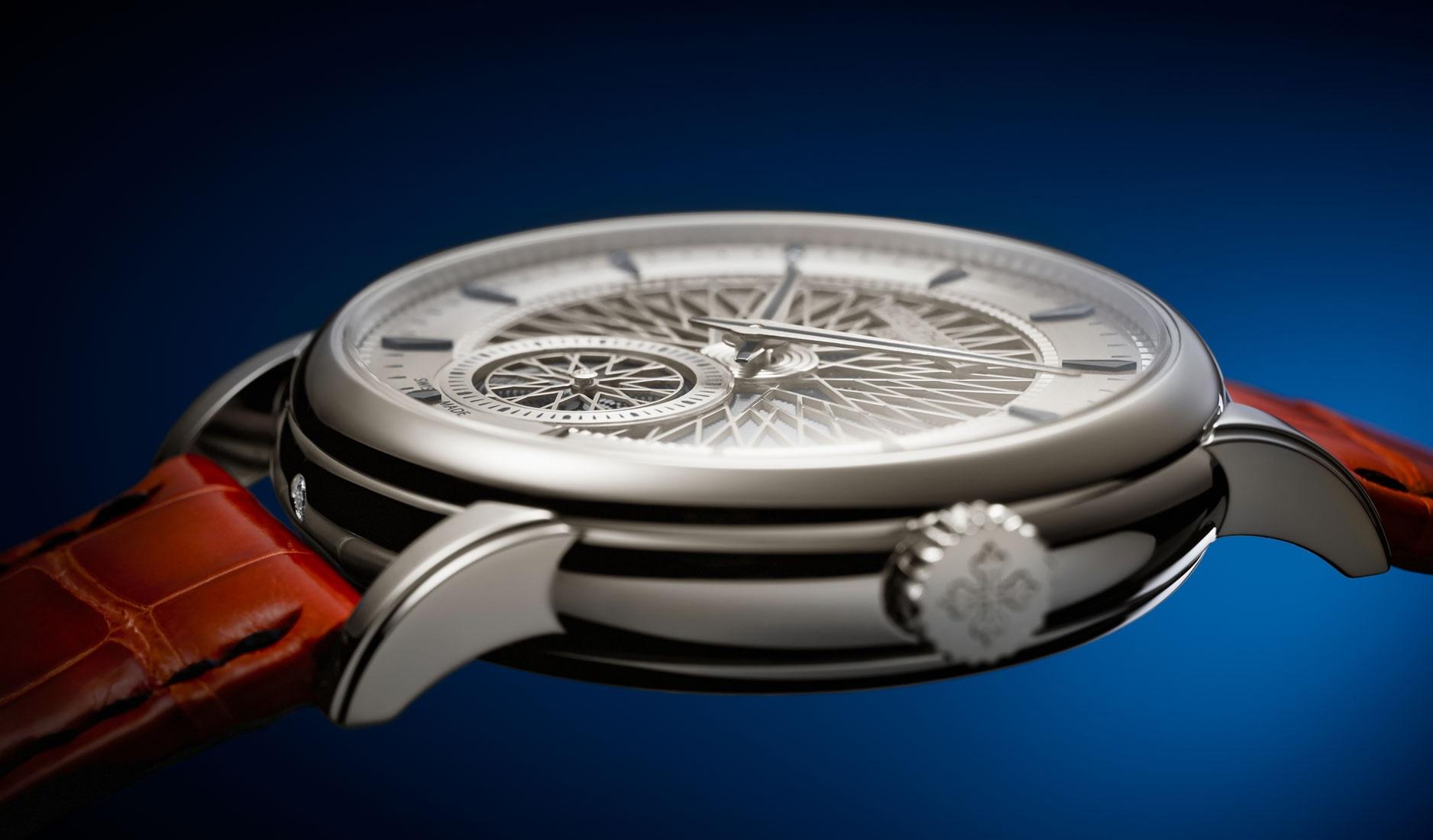 Yes, a certain Tiffany blue Ref. 5711 might have hogged the limelight in recent days with its astounding $6.5million record on the auction floor. In fact, one could be forgiven for thinking Patek Philippe was all about 5711s, given how they’ve been teasing us relentlessly with them.

It comes as no surprise then, that the subject of the Manufacture’s latest ‘Advanced Research’ project would be a minute repeater. Just when we didn’t think Patek could do any better with its chiming timepieces, the brand blows us away with this entirely new and innovative complication.

The sixth ‘Advanced Research’ timepiece since 2005 (read about the previous one here), the Ref. 5750P features an entirely new way of amplifying the chimes of the minute repeater. "The objective of a minute repeater, for me, is two-fold - to have louder sound and better harmony," explains Stern. "Today, we are focused on the volume. This is an Advanced Research (watch); a new way to fabricate a minute repeater. The next generation will need to find a good harmony to go with (the volume). But to do that, we had to start, and we are starting with the volume."

Christened, ‘fortissimo’, which (if you remember from music lessons) means ‘very loud’, the timepiece’s chimes are indeed much louder than the average minute repeater, thanks to a system that takes inspiration from a mechanical phonograph. 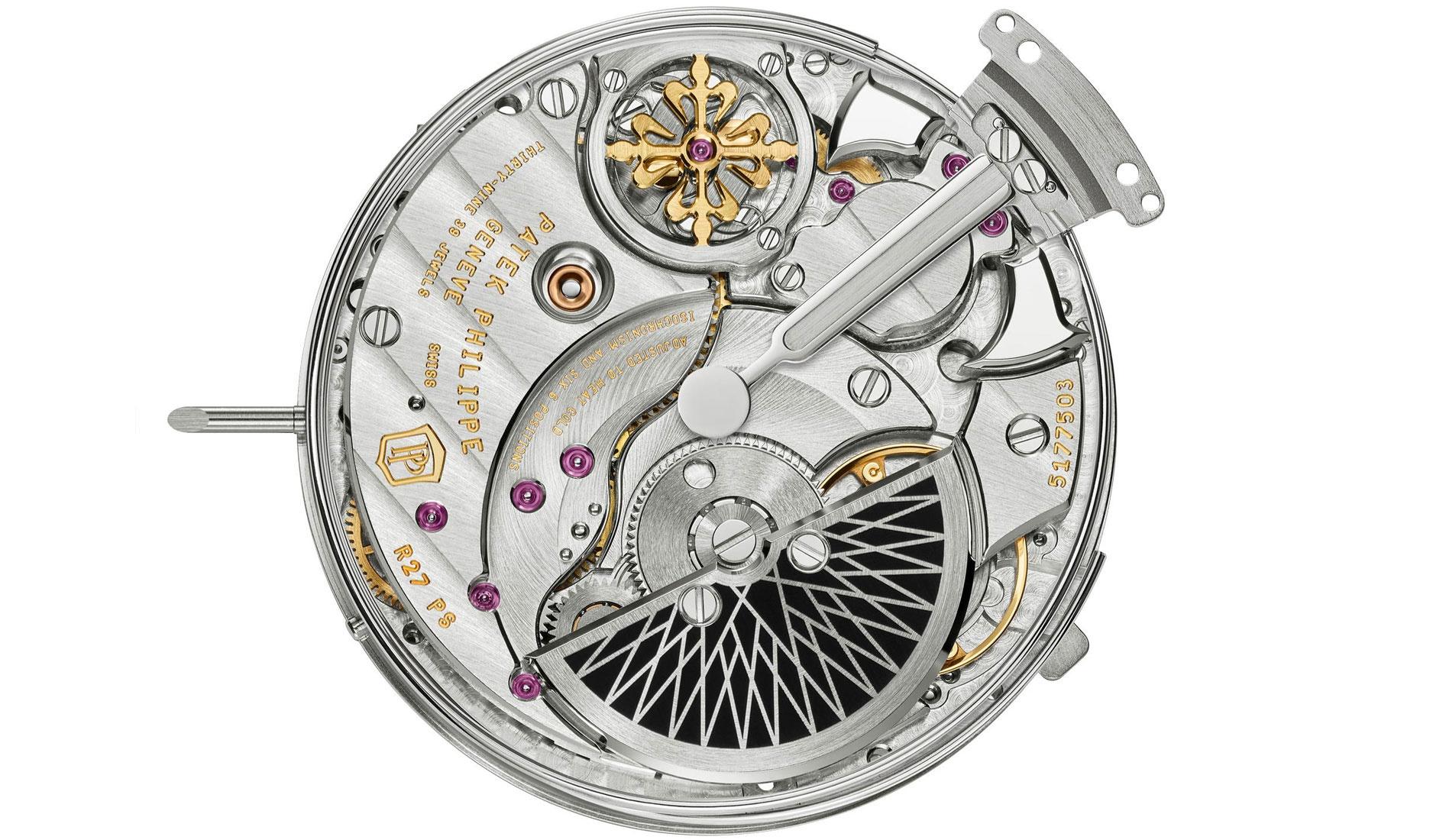 Like a gramophone, a mechanical phonograph works by a vibration generated by a stylus that’s guided by a groove. The vibration is then transmitted via an amplifying lever to a membrane and then broadcast to the listener through an acoustic horn.

With the Ref. 5750P, the vibrations are generated by hammers striking the gongs. These vibrations are then transmitted to a flexibly suspended lever, which is attached to the middle of a sapphire crystal oscillating wafer. The 0.08mm thick lever amplifies the sound, which gets further amplified through the sapphire crystal layer. It is then distributed through four openings at 3, 6, 9, and 12 o’clock in a titanium ring, with the sound waves exiting a narrow slot between the caseback and caseband. In addition, a dust filter protects the movement without affecting the sound. 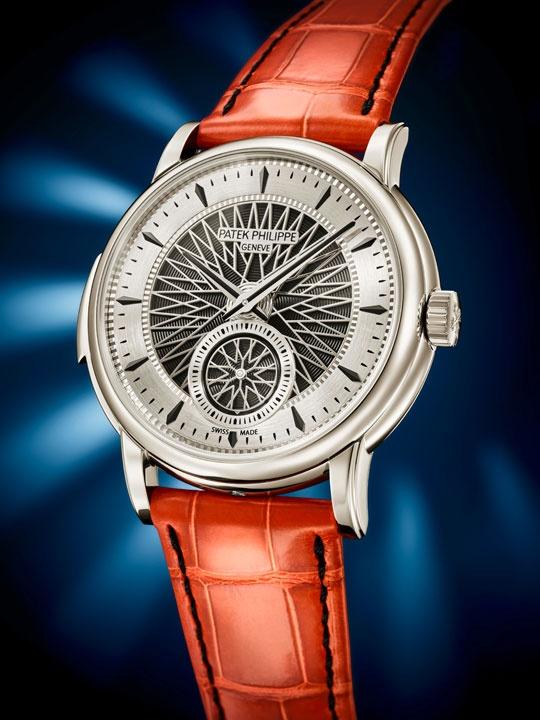 While conventional minute repeaters leverage on the case material to deliver a crisp sound, the Ref. 5750P’s sound system is completely independent of the movement and case material. Instead, an insulation rim fashioned from a high-tech composite material keeps the systems separate.

Although the 'sound system' is not connected to the case material, Patek still wanted to use the most challenging material for sound propagation—platinum—to showcase the efficiency of its ‘fortissimo’ system. Hence, the case, hammers, and even micro-rotor, are in platinum. 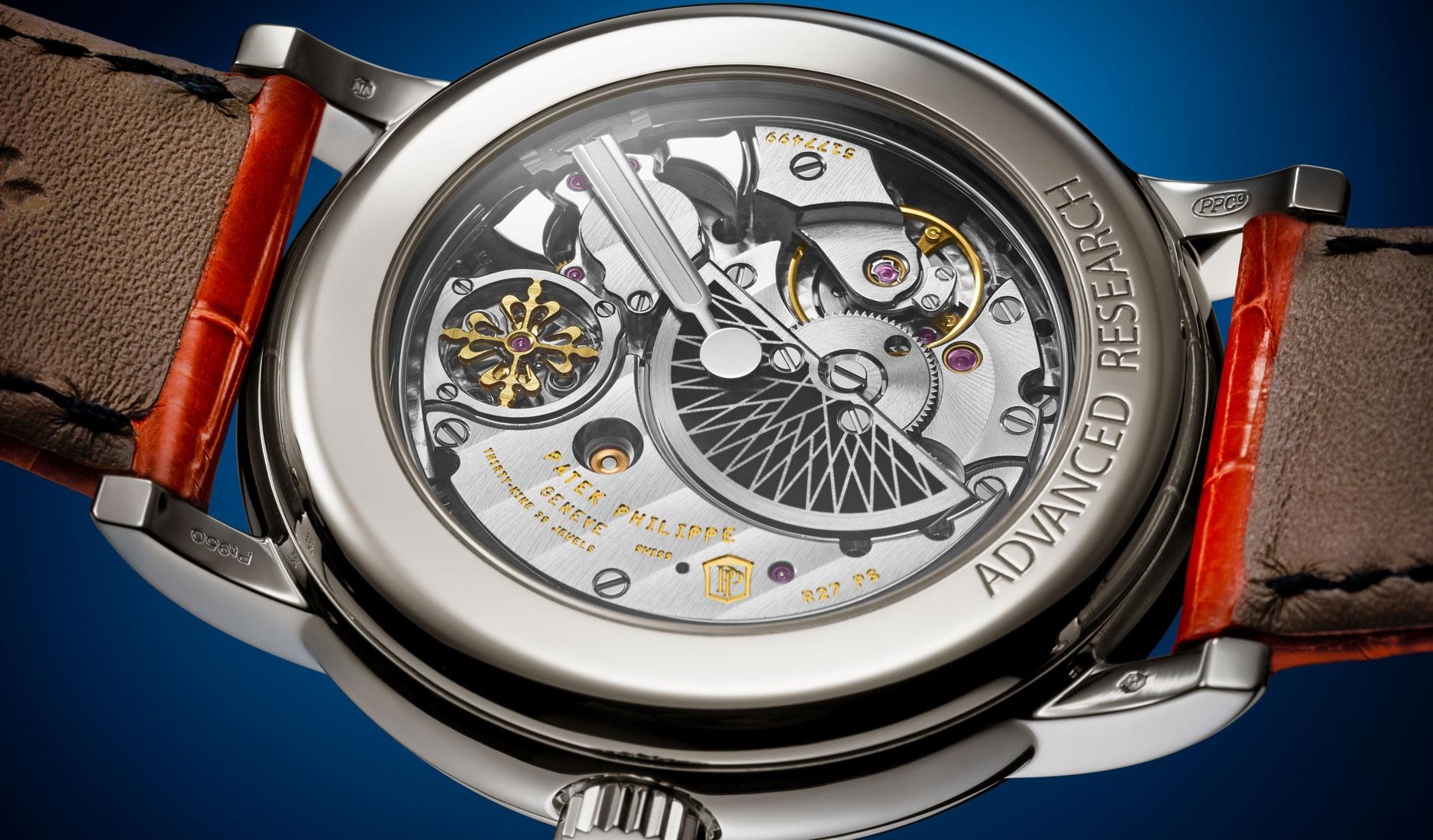 But volume isn’t the only thing on the agenda here. Patek, being Patek, also requires its minute repeaters to have that beautiful timbre it’s known for. When we heard the Ref. 5750P next to a classic Patek minute repeater at the press presentation, it was obvious both had an incredible tone but the Ref. 5750P had a deliciously rich resonance that envelops you in a snug blanket of dulcet tones.

Not only does it sound better, the Ref. 5750P also has a longer maximum duration of the time strike. At 20 to 21 seconds, it lasts about three seconds longer than the average minute repeater, allowing the sound to take its time lingering in the air.

Aesthetically, the Ref. 5750P takes inspiration from the Ref. 5178F from 2017 but with a more stylised twist. The central dial design was inspired by the spokes of wheels from 1960s cars, set against a snailed background for texture and depth. This pattern is repeated in the openworked small seconds disc at six o’clock with a triangular marker to indicate the seconds, as well as the micro-rotor behind. 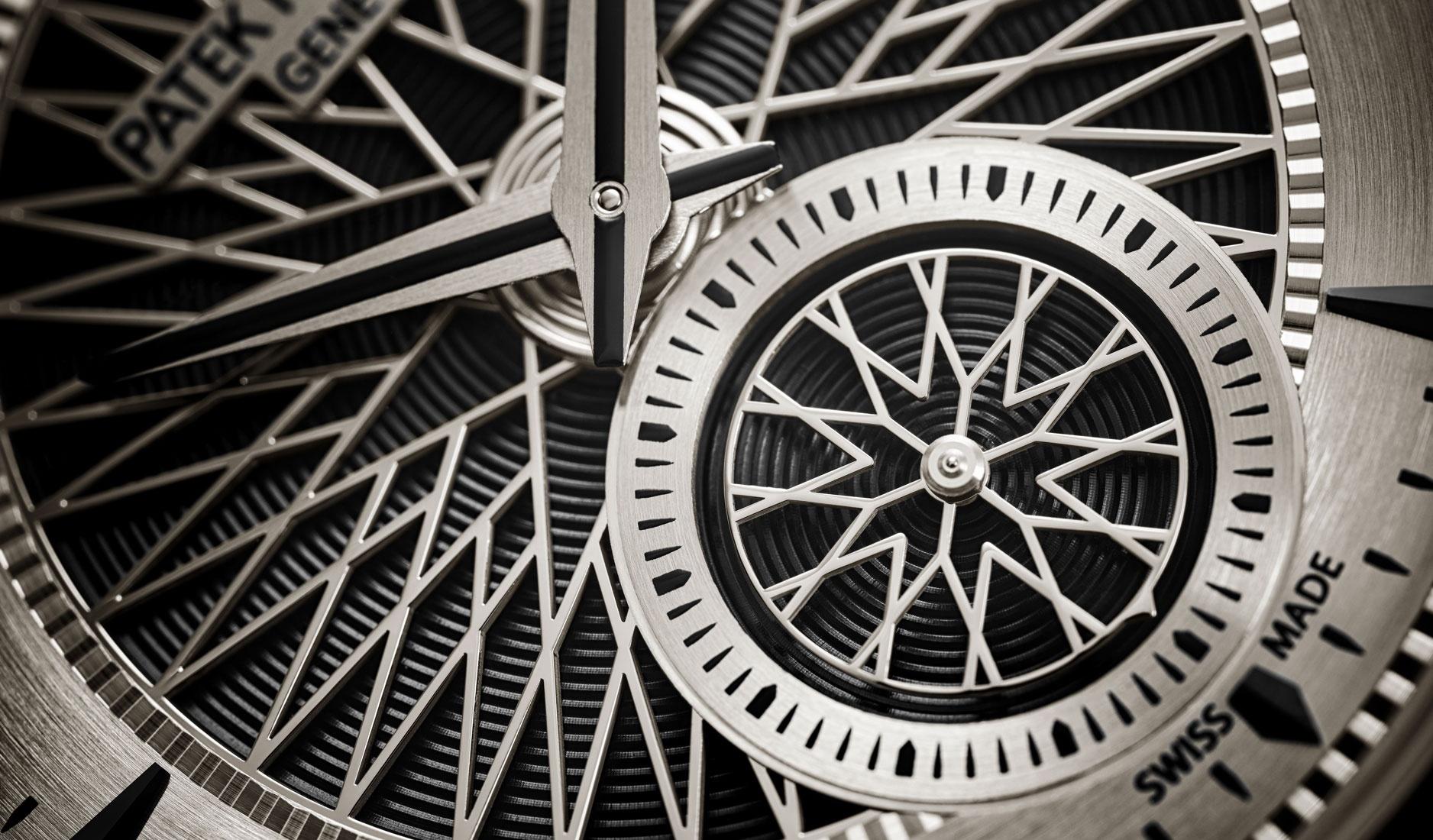 Limited to just 15 models, the Ref. 5750P also incorporates an ‘Advanced Research’ innovation from 2006—the Gyromax balance spring in Silinvar. As you would expect from an ‘Advanced Research’ timepiece, the model has four patents pending for the sound amplification system, free plate speakers, platinum hammers, and coplanar-recessed gongs.

Finished with an orange alligator strap with contrast black stitching and platinum folding clasp, the Ref. 5750P is Patek Philippe’s latest feather in its cap, and certainly a very beautiful one, fully deserving of every accolade it receives. And as fully formed as the Ref. 5750P  appears to be, we imagine Patek's fully realised version of its high-volume, rich harmony minute repeater to be truly mind-blowing.