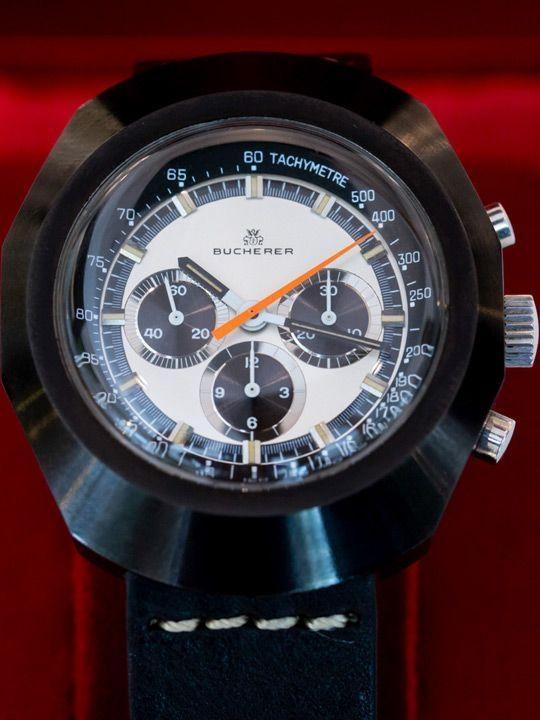 In the first of our vintage watch series, we turn the spotlight on the Bucherer Darth Vader Chronograph.

If you’re a Star Wars fan, this vintage timepiece should be right up your alley. Not only does it recall the Dark Lord’s helmet, it channels a badass vibe with its faceted black tungsten 45mm case and hooded lugs. “It’s very similar to the Omega version of the Darth Vader chronograph, which got its moniker from the late Chuck Maddox, an Omega chronograph guru,” says Shawn Tan, owner of Heirloom Gallery where the timepiece is available for sale. “The Omega version would be a lot more expensive though—between US$11,000 to US$12,000,” Shawn reveals. Here’s what we dug up on the Bucherer Darth Vader Chronograph:

THE LOWDOWN
A big name in Europe, Bucherer was one of the very first few retailers that carried Rolex. “If you look at old Bucherer catalogues, you'll see a lot of Rolex watches in there,” says Shawn.

This particular timepiece comes with original box and papers, making it quite rare and, naturally, bringing the price up accordingly. “Collectors like things that are complete; things with provenance,” Shawn explains. “For a collectible vintage watch that comes with original box and papers, it could even jack up the price by a few thousand more,” he says.

While he doesn’t know the exact number of these watches produced, Shawn says there aren’t many around. “That alone makes it quite rare and it’s a real collector’s piece,” he discloses. In addition, the parts are all original with nothing replaced except the strap.

MOVEMENT AND DESIGN
The watch is equipped with a manual-winding Lemania Calibre 1873 movement, which was the base calibre for the Omega Calibre 861. The latter, of course, was most famously used on the Omega Speedmasters of the same period which, in 1962, was selected by NASA for manned space flights and on 21 July 1969, accompanied Neil Armstrong's first steps on the moon.

The large angular case features a two-piece construction—it’s first made in stainless steel, then covered in a gloss black tungsten metal shell. Shawn tells us that, while it’s a very hard metal, tungsten wasn’t a commonly used material in watch cases back then. “Nowadays, we talk about innovating with materials like ceramic, but back in the 70s, watchmakers were already doing that with uncommon materials like tungsten,” Shawn discloses. “We only see more of that now when the industry is a lot more competitive and brands have to come up with special materials to outdo one another.”

Unlike dial coverings of today which usually come in sapphire crystal, vintage watches employed acrylic or mineral glass. This particular watch uses the latter, which is susceptible to scratches and can’t be polished, so greater care has to be taken during daily wear.

PRICE AND CARE
The watch is retailing for S$5,500. Apart from being cautious with the mineral glass, avoid scratching the black case.